Two weeks in Russia, and I have to admit it – I don’t really fit in here. I’ve done what I can to blend in: to be specific, I bought super-tight-circulation-killing jeans, and black adidas, which is what 50% of the women wear here. (The other 50% wear super-tight-circulation-killing jeans and high heels, and we all know that isn’t going to happen). But here is the kicker – I smile. A lot. I’m inclined to say hello to strangers. I have a laugh when I make a blunder. I think, quite possibly, in this way, I’m a typical American – egads!

But today, in a surprising turn of events, I had a total of 5 Russians smile at me. Three actually conversed with me, and one laughed as I egregiously butchered his language to shreds. (I remain convinced that the tight jeans and adidas have opened doors to me here in the big bad city of Yekaterinburg).

But thus far, my experience in Russia hasn’t been one of laughs and good times. It’s been completely fascinating, and it’s pushing my travel barriers to their limits – but I can’t say it’s been particularly easy yet. My first four days were spent in St. Petersburg, which truly is a magnificent and beautiful city. Then, onto Moscow, which, while pretty amazing, was also huge, crowded, and a bit of a challenge to get around.

Two nights ago, I landed in Yekaterinburg, which is about 30 hours into my 7-day train trek across Russia, Mongolia and China. Russia is (to put it somewhat stupidly) frigging HUGE. If you take a 30 hour train ride in the U.S., you have made it about halfway across the country. (That is, if the U.S. had a functional train system – but I digress). The U.S. is big, but it’s got nothing on Russia. In Russia, 30 hours on the train is a lark. Sixty hours, you are getting somewhere (like, the Urals, or Siberia) – 100 hours, and you are in the thick of things. I managed, (somewhat idiotically, I’ve decided) to choose Yekaterinburg as a good stopping point – it’s not what I would call a beautiful city, although, I’ve warmed to it upon closer inspection, and partially on account of my record-breaking five smiling Russians.

I’m taking the typical Trans-Mongolian route through Russia, Mongolia and China. Technically, the Trans-Siberian keeps a firm grip in Russia, and ends in Vladivostock, which is on the southeastern tip of the country. But my visa kicks out in 10 more days, and I didn’t want to play games with the Russian police, (they certainly don’t appear to have a sense of humor), hence a route through Mongolia. Plus, lets face it, its Mongolia, and how often does one get to go there?

My trip, which continues tomorrow, is another 30 hours to the industrial city of Krasnoyarsk (I must be crazy), then onto Irkustk, with a trip to Lake Baikal, the deepest lake in the world; next, onto Ulaanbaatar, the capital of Mongolia. I’m arriving just as winter gets kicking, so if I’m lucky, I’ll find some poor unsuspecting family to take me in for a few days  — otherwise, my stop in Mongolia will be pretty quick, and then I’ll be off to China!

The landscape of this trek has been spectacular so far, and from what I hear it’s the least interesting part. So far, a thousand miles of birch trees, as far as the eye can see, all awash in the colors of fall.

I would have popped out my camera to properly document it, but there were three semi-drunk Russian men in my cabin, one who seemed to have a fetish for saying “American Passport” over and over again, so I decided the big-camera was best left in my bag. But, to give them credit, they offered me every last ounce of their food, and I ate most of it. For those of you who know me, I’m quite persnickety, so eating stinky Russian cheese and suspect meat/mushroom products was a bit of a stretch for me, but sitting on a train for 30 hours apparently makes me hungry — and , lets face it, I was wearing my nice big fat American jeans at that point.

Travel certainly is broadening – yesterday, I thought I was about one good blunder away from an imminent mugging – granted, I appear to be staying in a less than ideal neighborhood of Yekaterinburg – but today, I’ve managed to find a café that serves pancakes and ice cream at all hours, so I’ve been a happy camper. That and the five smiling Russians, and it was practically like being in Disneyland.

Now, onto Krasnoyarsk! A few pics from my last night in Moscow, my first 30 hours on the Trans-Sib, and a few from Yekaterinburg.

2 thoughts on “Smiling is my favorite” 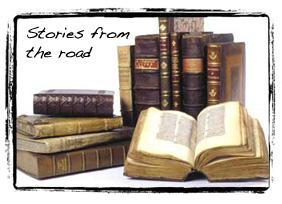